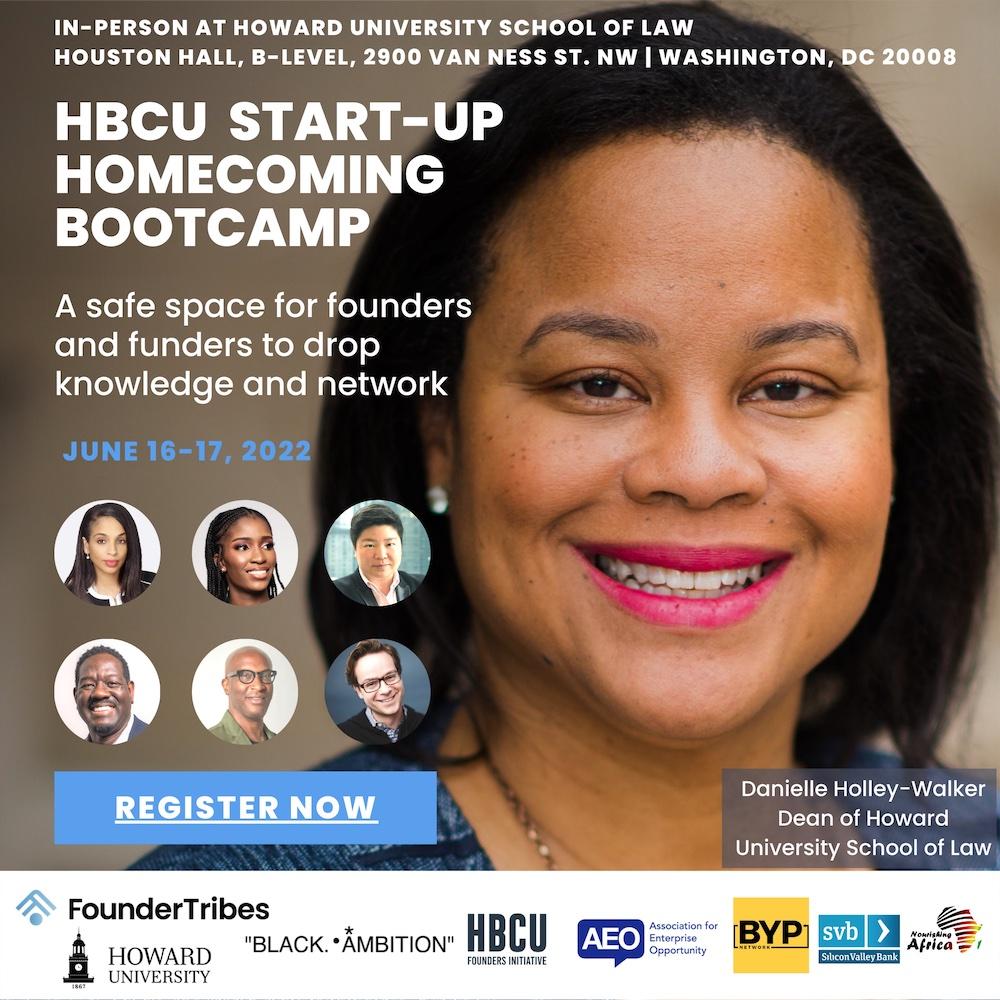 FounderTribes was founded by Gary Stewart, a graduate of Yale College and Yale Law School, where he recently served as a guest lecturer on entrepreneurship. The start-up focuses on opening up closed professional networks, especially for minority entrepreneurs. Startup founders pitch their business ideas to a community of entrepreneurs and investors who identify potential problems. Once a business is deemed fundable, FounderTribes’ algorithms match each entrepreneur with investors who are statistically more likely to fund their business.

“It is an honor to collaborate with Howard Law, who has a singular importance in the history of the African-American community. Howard exists precisely because while talent is evenly distributed, opportunities are not,” Stewart said. “Events like the HBCU Bootcamp are just one step in trying to correct this historic disadvantage in entrepreneurship, given that black and Latino founders receive less than 3% of venture capital funding, while ‘they represent more than 32% of the population. Our hope is that founders and backers who want to give everyone a fair chance will continue to build an inclusive and supportive community on the FounderTribes platform, which anyone can download from the app stores.

The two-day event will feature VIP venture capitalists representing over $18 billion in assets under management, entrepreneurs and ecosystem players, all focused on supporting overlooked business founders. Guest speakers include prominent Howard alumni, including Marcus Glover (Class of 1991), General Partner and Director at Lockstep Ventures, and Abraham J. Williamson (class of 14), who, after Howard, earned a law degree at Harvard Law School and is now a law firm entrepreneur. Other speakers include Jen-WangCOO of Reddit; Matt Turkmanaging partner of FirstMark Capital, a $2 billion fund that has backed household names like Airbnb, Shopify and Pinterest; Bhaskar Goshpartner and CTO of 8VC, a $1.9 billion fund launched by Palantir co-founder; Alice Vilma, CEO of Morgan Stanley and one of the leaders of its Multicultural Innovation Lab; and Felicia Hatcherthe CEO of Black Ambition, a non-profit organization co-founded by music superstar Pharrell Williams that is currently offering a $1 million prize to Black and Latinx founders.

Participation is in person only. Please pre-register here.

Founded in 1867, Howard University is a private research university comprised of 14 schools and colleges. Students follow more than 140 study programs leading to undergraduate, graduate and professional degrees. The University operates with a commitment to excellence in truth and service and has produced one Schwarzman Scholars, three Marshall Scholars, four Rhodes Scholars, 12 Truman Scholars, 25 Pickering Scholars, and more than 165 Fulbright recipients. Howard is also producing more African-American doctorates on campus. recipients than any other university in the United States. For more information on Howard University, visitwww.howard.edu.

FounderTribes is an application that uses artificial intelligence to break down the network of old boys. It uses state-of-the-art technology to ensure that race, gender, geography, socio-economic status and sexual orientation do not prevent promising entrepreneurs from being funded and supported. The app welcomes both tech and non-tech founders, who make up the overwhelming majority of black and brown entrepreneurs, and it’s designed to support – at scale – the tens of millions of founders who fail in the world every year. For more information about FounderTribes, please visit www.foundertribes.com.