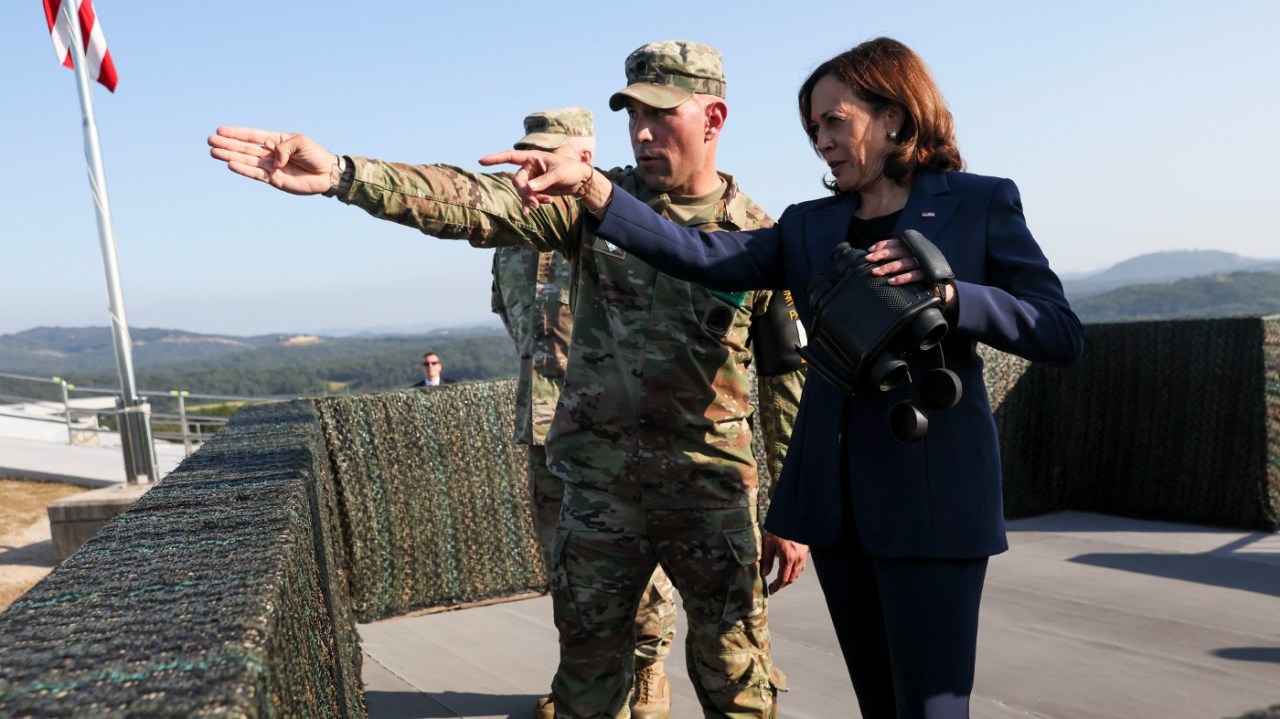 Vice President Kamala Harris indulged in statements and sightseeing on the final day of her recent Northeast Asia odyssey, before North Korea gave her a rude farewell in cooking another pair of missiles shortly after boarding Air Force Two at Osan Air Base in South Korea for the return flight to Washington.

The missiles fell harmlessly into the sea off the North East Coast, as did a pair of missiles fired before his visit, but the message was clear. North Korean leader Kim Jong Un is reportedly defying US and South Korean attempts to convince him to abandon its nuclear and missile program in deepening confrontation with both of them, as well as Japan.

Considering all that Harris had to pack into a long and tiring day in South Korea after three hectic days in Japan, she could be forgiven for an embarrassing situation. blunder. Inside the demilitarized zone between North Korea and South Korea, looking across the line to the North, she praised the United States’ ties with “the Republic of Korea North “.

Oh oh. The script, of course, said “the Republic of Korea”, the official name of the South, but Harris, without wasting a moment, was still able to sting the brutal dictatorship of North Korea, which she pitted as scripted against the “flourishing democracy” of the South. And, echoing the familiar clichés and watchwords of a steady stream of U.S. officials over the years, she wanted South Koreans and North Koreans to know that Washington’s connection to “the Republic of Korea was indeed “foolproof”. There is, as US officials always say, “no daylight between us.”

While the wording was hardly original, it must have been encouraging for South Korean President Yoon Suk-yeol, who was strengthen ties with the United States since taking office in May after an extremely narrow victory over a leftist rival. Harris and Yoon met before his visit to the DMZ, focusing not only on the usual assertions of alliance strength, but also on the economic issues plaguing the relationship.

For many South Koreans, questions about President Biden’s pet Inflation Reduction Act were more important than the resounding statements they heard time and time again about unity against North Korea. Yoon, like reported by Yonhap News of the South, expressed “concern that the law will hurt Korean automakers by only giving tax credits to electric vehicles assembled in North America.”

Harris, who had clearly been carefully briefed on the appropriate response, deflected criticism, saying she and Biden would “examine the matter carefully to find ways to address South Korea’s concerns.” It was up to Yoon’s spokesperson to report on this banter as the White House dwelt on the threat posed by the DPRK, Democratic People’s Republic of Korea.

Together, says the White House, the South Korean President and the US Vice President “condemned the DPRK’s provocative nuclear rhetoric and ballistic missile launches” and “discussed our response to potential future provocations, including through trilateral cooperation with Japan”. Of course, they also once again called for the denuclearization of the Korean peninsula, which Donald Trump and Kim Jong Un vaguely agreed on. joint statement which they signed at their summit in Singapore in June 2018.

More than four years after that fine day, Harris pointed out the North American challenge from his vantage point below the North-South line where the Korean War Armistice was signed in July 1953. Staring at the North Korean guards on the other side, she couldn’t help but sense the impending North Korean threat.

“It’s so close,” was his spontaneous, unscripted response to the drama of the moment. North Koreans, dressed in hazmat suits to guard against the spread of COVID-19 from the South, watched her through binoculars and presumably photographed her every move, as they always do when visitors, including mere tourists venture into the DMZ. When told by an American escorting officer that American and North Korean soldiers have been known to communicate through megaphones, Harris remarked, “It’s high tech; we made history.

Highlighting the inability to get anywhere with North Korea, Harris in Korea and Japan spoke of the need for cooperation between them. A new word, ‘trilateralism’, is entering the lexicon of efforts to persuade South Korea and Japan to cast aside their historical animosities and work with the United States on ways to defend themselves against North Korea. .

Certainly, trilateralism was a highlight of Harris’ visit to Japan, where she attended the state funeral in Tokyo of Shinzo Abe, the former prime minister assassinated in July. Having done so, she met with Prime Minister Fumio Kishida, reiterating the need for Japan and South Korea to cooperate despite the bitter historical issues of Japan’s colonial rule over the South.

The Japanese were perhaps more interested in his focus on defending Taiwan, the island state of the independent Chinese province. To affirm Biden’s commitment to Taiwan, she boarded a US destroyer, the USS Howard, at the sprawling US naval base at Yokosuka south of Tokyo, accusing China of ‘flexing its might military and economic” with “provocations across the Taiwan Strait”. ”

In fact, when she arrived in Korea, Harris did not discuss the defense of Taiwan with President Yoon. Anxious not to offend China, the South’s biggest trading partner and also North Korea’s only true ally and benefactor, Yoon and his aides were extremely cautious and sensitive when asked about the danger of a Chinese attack on Taiwan, avoiding any promise to join the island. defense.

A decade in the life of an American family’s defense of EPA Juan Williams: Kevin McCarthy would be a weak and disastrous speaker

Besides these cosmic issues, Harris touched on another sensitive topic in Korea — the role of women in what some see as an irredeemably male macho society. She found the time to lead a round table with women, saying“If we want to strengthen democracy, we must pay attention to gender equity.”

She also reportedly broached the subject with Yoon, who pretended to advocate for women’s rights while attempting to suppress the “Department of Gender Equality”, an agency whose good deeds seemed more symbolic than substantive.

Donald Kirk has been a journalist for over 60 years, focusing much of his career on conflicts in Asia and the Middle East, including as a correspondent for the Washington Star and the Chicago Tribune. He is currently a freelance correspondent covering North and South Korea. He is the author of several books on Asian affairs.